Spring is definitely here, and with that comes bounties of those gorgeous red and pink bunches, so versatile it can be made into both sweet and savory dishes.   Rhubarb reminds me of summer in Norway – my mom would have a small area behind our stabbur (outhouse) where rhubarb would grow like crazy.  Rhubarb thrives in a northern climate, and is one of the few fruits except berries we can successfully grow that far north. As kids, we were happiest just eating the rhubarb stalks picked straight from the ground, dipped in a big bowl of sugar.  An instant dessert,  it was a thrilling feeling to be able to create this treat ourselves, with no help from mom and no trip to the store needed!

Rhubarb has a very tart taste, making it necessary to add a sufficient amount of sugar to whatever you are making to offset the acidity in the plant.  While rhubarb is considered to be a vegetable,  in 1947 it was decided in the U.S.  that it should be counted as a fruit, because of the way it was used.

In Norway, the plant arrived in the 18th century from its original home of central Asia.  Norwegians initially utilized rhubarb as a medicinal plant.  The root was the most important part, and was dried for use both externally and internally.  Rhubarb was additionally used as a decorative plant;  it was only in the 19th century it entered the Norwegian kitchen.  The stalks were sometimes dried and preserved, but when fresh, they were diced into pieces and placed in mason jars with cold water.  Rhubarb was also boiled or cooked, and sweetened with honey or sugar or mixed with sweet berries and fruit, and canned.   Rhubarb today is a popular ingredient in wine making ! Since Norway’s climate is too cool to grow grapes we have to turn creative in our quest to make wine, hence utilizing berries, rhubarb and other fruit is very common. This is another large topic that I will reserve for a future post, but doesn’t that sound delicious??

There are many different varieties of rhubarb, and as mentioned above,  it can thrive during cool, wet summers (which is often the case in Norway) and is also a very productive plant.   The red stalks have a lower acidity level than the green stalks, which can be helpful when picking your rhubarb at the farmer’s market or in the store.  Norwegians make jam and “saft” (juice) from rhubarb, as well as putting it in cakes, compotes, puddings and even porridge.   In more recent recipes, I’ve seen sauteed rhubarb be served with savory dishes, for instance – a nice substitution for tart cherries which is the more traditional condiment.

Rhubarb porridge used to be one of my favorites – served with (non dairy) milk it’s deliciously sweet, tart and creamy.

The season for rhubarb in this part of the world is mid-to late spring, while rhubarb can grow year round in warmer climates.  In Norway, we enjoy rhubarb more in the midst of summer, as the temperature is on average much cooler this time of year than in the U.S. and the plant needs the summer to come into full bloom.  I love the seasons and am happy to live in a place where we have  fruits and vegetables available at different times of the year. This gives me a chance to miss them and look forward to when they come back at the farmer’s market.  There is no doubt I get excited when seeing these colorful stalks pop up!

While most commonly seen in pies and crumbles, where it is often combined with strawberries and other sweeter fruit,  there are endless possibilities of how to use the rhubarb in your cooking.   I have a fantastic recipe for a refreshing soup I thought I would share with you – this is something you will see often in Scandinavian cooking and is very popular.  I have a feeling I will be back with many other recipes throughout the summer featuring this wonderful fruit – so stay tuned and be sure to follow my FB page as well for additional tips,  stories and pictures!

Juice of one half lemon

Using a potato peeler peel off the outer layer of the rhubarb (sometimes this gets stringy, just like celery). Cut the rhubarb into 1-2 inch pieces, and place in a soup pout along with the water and sugar and cinnamon stick. Cook until the rhubarb is soft.   Discard cinnamon stick, and puree mixture in blender until smooth and add lemon juice and adjust seasoning as needed.  Garnish with sliced strawberries and mint leaves and/ or a spoonful of sour cream that has been mixed with a little cinnamon. Serve room temp or cold.

* Note 2:  You will see many people prefer to not puree the soup but leave the pieces intact in the soup.  This is perfectly fine – if you prefer to have something to “chew” on, just eliminate the step where you process the soup in your blender.

Tip: You can also serve the soup with a dollop of vanilla ice cream in the middle – particularly delicious and decadent! 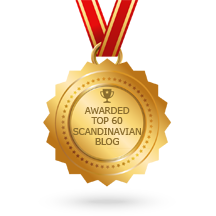